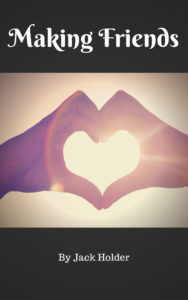 “Do not be fooled. This creature is not some petty, insignificant thing. She has not been reduced to nothing by the ravages of time. Even now, after all these centuries, we must treat her like she is. She is vengeance. She is death. She is a goddess.”

Acolyte Rafe Cauley rolled his eyes. Someone was listening a bit too hard to the Masters’ lectures.

“We have been chosen,” Greta Von Hammersmit announced. The gnome woman strode forth, caught up in the rapture of her quest. “The Order of the Flawed Snowflake has given us this arduous task. In recognition of our years of service, and dedication to the tenets of the Order…”

Rafe gave a harsh cough, and bullied his way through another particularly dense patch of trees. A century of disuse was apparent in this little backwater area. Everywhere there was forest, followed by even more forest. He had to scrunch up and think tiny thoughts moving through a thicket of bramble. Being half-dwarf, half-elf, this was not exactly easy.

Rafe did not look like he was half-elf. Beyond the particularly green eyes, and the compound bow strapped across his back, he looked like a typical dwarf. He was taller, standing well over five feet. He preferred hardened leather over the more scholarly robes the other acolytes wore. And his dwarven heritage allowed him to touch iron, a boon that many of the fae did not have.

However, he was not blessed with an extraordinary amount of patience. So when Greta started to list the achievements of the Order, he did snap.

“Greta!” He shouted. “The Order does not care about you listing their accomplishments when they’re not there to revel in it!”

The gnome woman quailed. While Rafe was large for a dwarf, she was small for a gnome, barely gracing four feet. Her slight stature and pale orange hair only further diminished her appearance, as did the ornate spectacles.

“Don’t know why I’m stuck with someone who hasn’t left the reception desk in six years,” Rafe muttered. “To go tramping through the woods to find out if our myths are still where we left them.”

“Acolyte Cauley,” Greta said. “I can assure you that this mission is of the utmost importance. And as to questions about my personal character and ability…”

The young acolyte dove to the ground. Rafe kept walking, and had well over a hundred meters of blessed silence before the gnome caught up to him.

“Bookworm,” Rafe muttered. This was going to be an excruciating trip into nowhere with this woman. The boredom would be punctuated with busts of manic rage at her incessant babbling.

“Do you think what we do has no merit?” Greta asked.

“I think I’d be better suited at one of the major cities,” Rafe said. “Working with a city watch, or perhaps studying up on defense.”

“This is defense,” Greta said. “This is the greatest job you could be given with the Order. Do you even know who we are securing?”